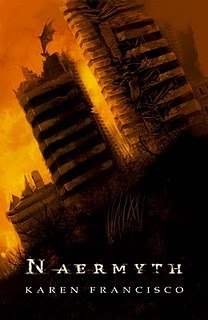 What if the creatures of our folklore were not just stories? What if they exist in hiding and were just waiting for the perfect opportunity to come out of the shadows and take over the land? Would you survive and fight, or would you be their next dinner?

Naermyth is a dystopian novel about the current state of the country where mythical creatures has taken over the and has driven the humans at the brink of extinction. The last of the humans are fighting for their life, and the mystery of the ibig ng Bathala and its prophecy is something they are hoping to fulfill.

I’m giving this book 4 stars because I believe it has a lot of potential in store. To cast aswangs, dwendes, kapres, and the like into an action packed plot is attractive to Filipino readers who would want some relatable sci-fi, and something to brag about. The novel started so strong and Athena was like a local Lara Croft of the Shepherds. Her discovery and rescue of Dorian almost, ALMOST had me throw up because of the usually predictable love-thing with the rescuer and the damsel in distress. On that plot twist, I commend the writer because she had me there for a minute. Although I must say, from starting strong, it became cheesy in the end (here I go again with my anti-romance thing).

The characters on the other hand, were a mix of okay, and meh. Dorian is like this big lost dude who has no idea what is happening. Mamon is the typical power-hungry leader. And River is a annoying character who turned out to be better.

If there is one thing I feel most peeved about is the use of language. I always feel like if you are going to build up Filipino characters in a local setting, and then use English as primary language, injecting Tagalog sentences here and there makes me cringe. Maybe it’s just me being critical. But seriously, reading this:

“Tabi-tabi po”, I grunted with a small smile.

“Wala nang bisa yan”, said a high-pitched voice. “That phrase of respect died along with most of your species”.